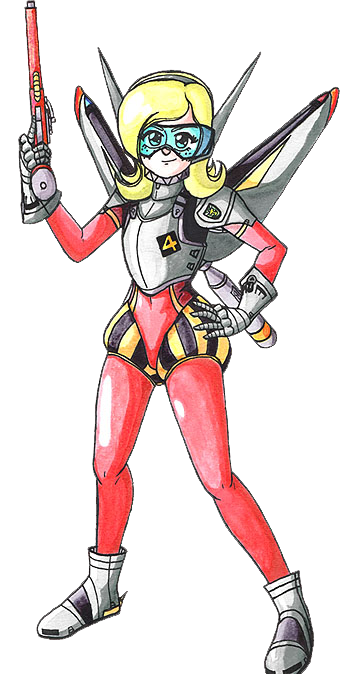 Bio: Teenage obsession with stardom is nothing new. Young lads and ladies often revel in the thought of being the center of attention, but for some that whimsical daydream is...taken a bit too seriously. Margo Steelbonnet is many things: self-interested, ambitious, flirtacious, snarky, and idealistic. What she ISN'T is particularly compentent or bright or reliable, which would perhaps normally not be especially harmful for a girl her age if it weren't for her particular choice in lifestyle. And a particularly ill-planned choice in lifestyle at that.

A childhood marked by constant familial disputes and turmoil left a young Margo eager to escape her chaotic home life, so when the local Colonial Trained Band (CTB) extended a welcoming hand to her and other youths like her, she jumped at the chance without ever giving it a second thought. One of the few brightspots of her childhood was a seemingly endless collection of old comics, foreign cartoons and classic movies that captivated her young mind with images of sexy seductive dames, strong-willed heroines, and adorable young magical girls. Naturally, Margo's decision to join the CTB was made not only as a means of escaping her family but as a way to act out her childhood fantasies of being an amazing and beautiful heroine all the Earth and colonies would adore. Unfortunaly for her, things weren't about to go so smoothly.

Having aced the low-standards for the training and examinations, Margo was added to the CTB's roster without delay alongside a score of other raw recruits, being assigned to a Cuirassier squadron of the Neo-Londinium Heavy Cavalry Brigade (affectionately known by the locals as the "Londinium Lobsters"). Almost immediately, however, the girl found herself not particularly endearing to her fellow troopers. Her inability to take her position serious as a protector of the people of Neo-Londinium, constant immature flirting with the male troopers, and disruptive pandering to reporters and the news did much to spread a dislike of her amongst her peers.

Now, for better or for worse, Margo Steelbonnet is about to learn the hard way that the seemingly-luxerious life of a cavalry trooper comes with a hefty pricetag. A storm is brewing on the horizon that is going to test the delusional teenage girl's naive preconceptions about the world and conviction to her childhood dreams.

Equipment: As a part of the Heavy Cavalry, Margo wears an standard issue form-fitting high-tech garb known as an Arming Suit (specifically the M-1550 Type C). Arming suits are considerably more complex than the simple uniforms worn by the various other forces of the CTB, featuring internal synchronization circuitry linked to the operator's HUD and armour, environmental protection from a broad range of harmful substances, ballistic protection, and temperature regulation among a host of other minor features. As a result, these sophisticated suits are extremely expensive to produce and are largely relegated to use by heavy cavalry groups and specialist units, costing around the same price to produce as 500 basic infantry uniforms.

Overtop the Arming Suit is a compliment of fitted plate armour featuring advanced computers synched to the operator's suit and HUD and verniers to assist in maneuverability. These plate armours can come in a variety for shapes and forms, though the particular variant Margo uses is a recent standardized model known as the Greenwich B. The armour is chiefly proofed against current beam weaponry, though is somewhat heavier than previous models of armour as a result of trying to keep up with the latest trends and developments in beam weaponry. In addition, the Greenwich B and other new models of armour feature the use of powered sockets which can mount further external devices such as computers and weaponry for added versatility on the field. Helmets of varying levels of protection and complexity have traditionally been worn by heavy cavalry units, though in more recent times budget limitations and individual preference has seen many heavy cavalry troopers adopting visored-headsets instead. While this most definitely leaves the head fairly exposed, it certainly looks cool and stylish on TV.

Back to Main Page